Our analysis of the 2016 Presidential Race in Florida reveals that 16 of its 23 largest counties show a “red shift”, meaning the Republican share of the vote increases when votes are totaled from smallest to largest precinct. Six of these counties show a very strong red shift – greater than 5%. We estimate that the margin between the candidates was changed by at least 218,000 votes due to these red shifts.

Additionally we found large discrepancies as well as implausible parallels between registration data and vote data.

In Florida more than any other state that we have examined, a great many of the smaller counties voted very differently from what the voter registration numbers would lead one to expect. 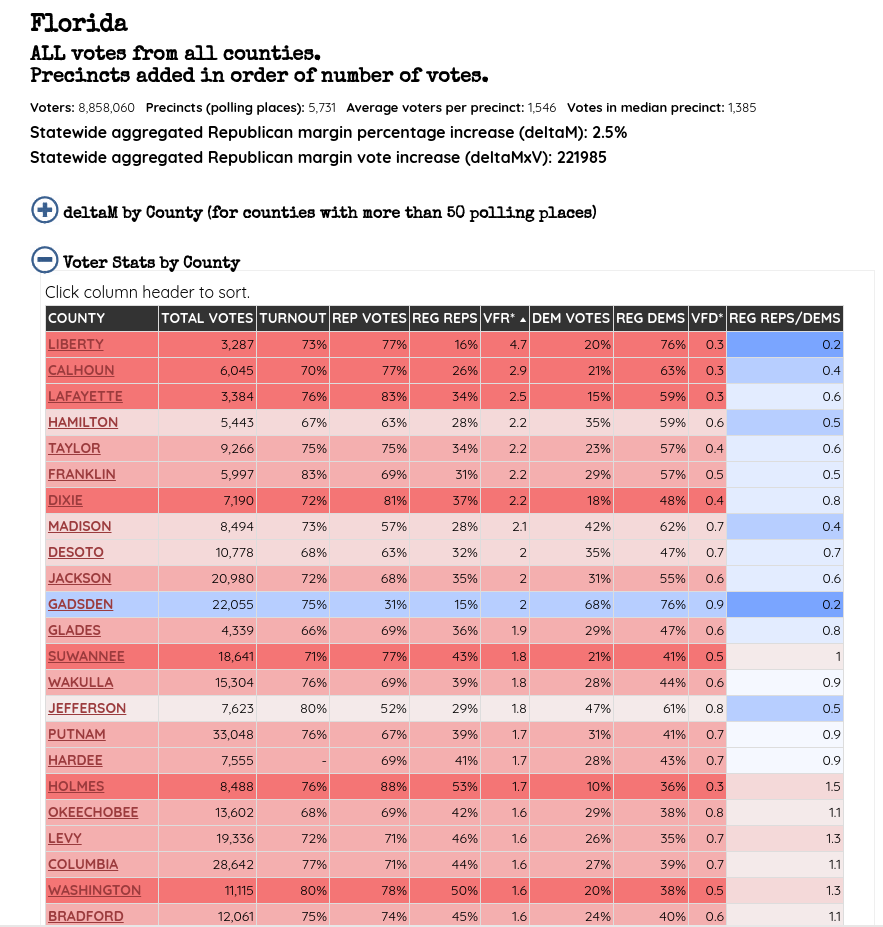 Here are the top “deltaM” values for Florida counties, along with an estimate of the number of votes “flipped” (deltaMxV) in each county. 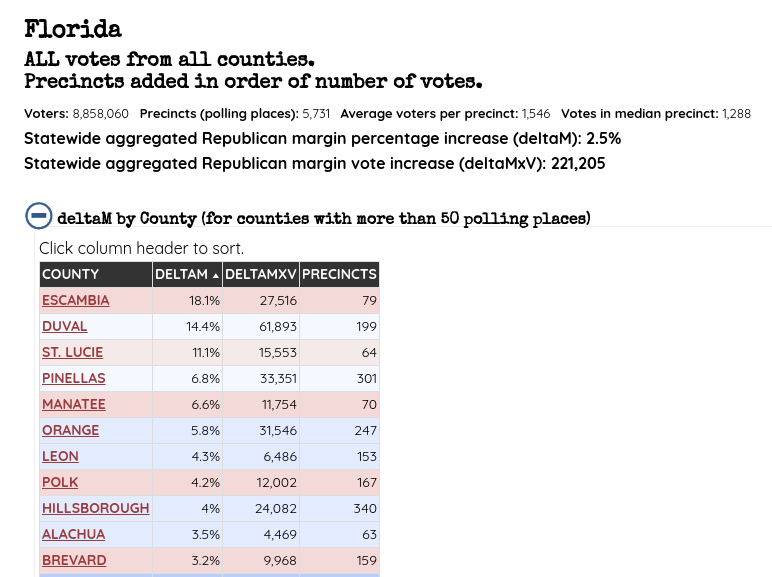 In Florida we were able to obtain voter registration statistics by party and by precinct. Unlike in Ohio, in Florida the voter turnout seems to be slightly but not strongly correlated with precinct size, as are the voter registrations for voters who aren’t affiliated with either major party. The “cumulative values” for both of these numbers obey the Law of Large numbers rather nicely in all counties: 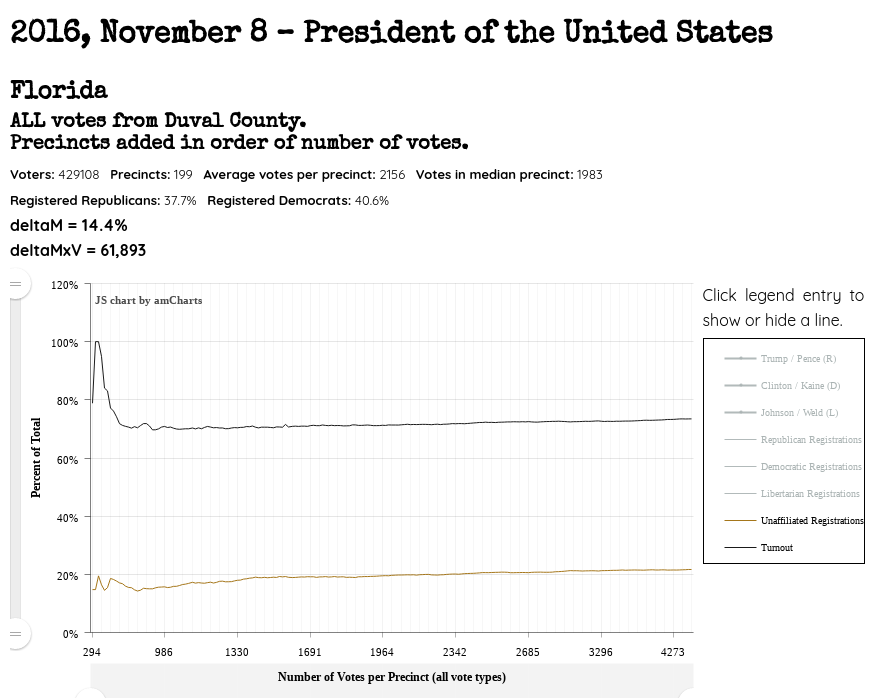 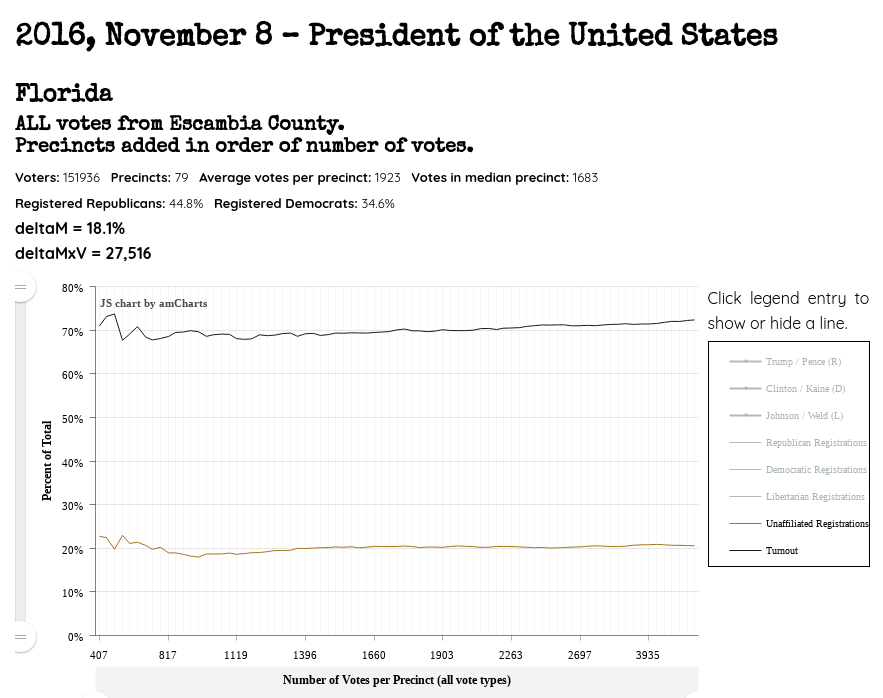 But look at the Republican and Democratic cumulative registration values for the same two counties: 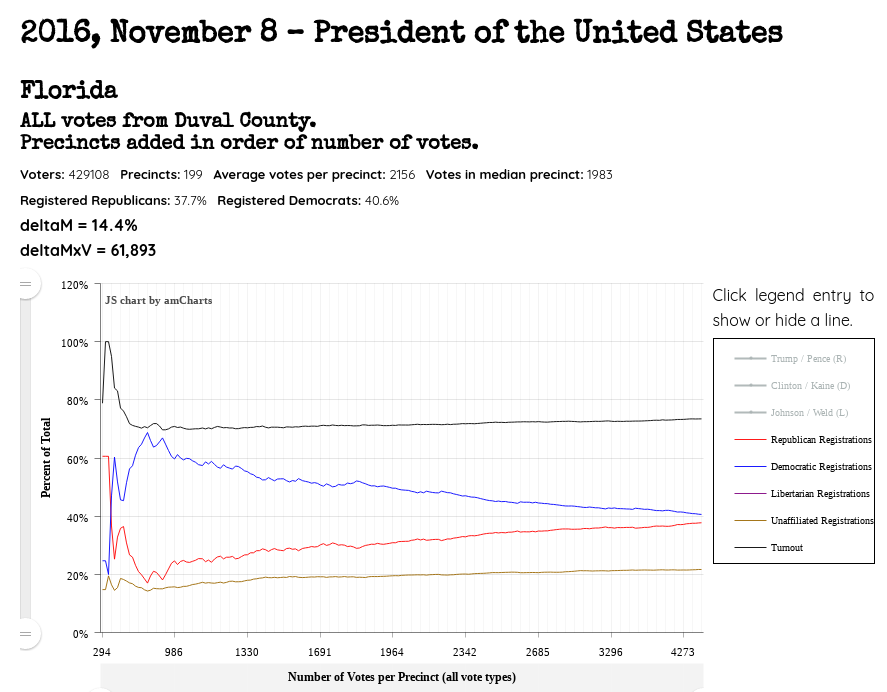 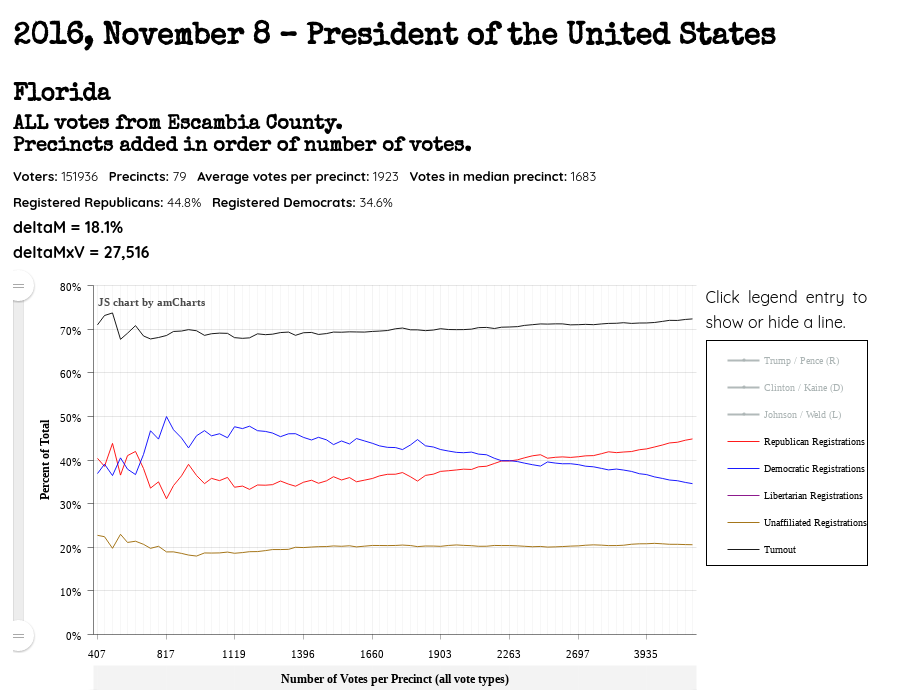 This becomes even more perplexing and astounding when we look at the cumulative vote totals for these two counties: 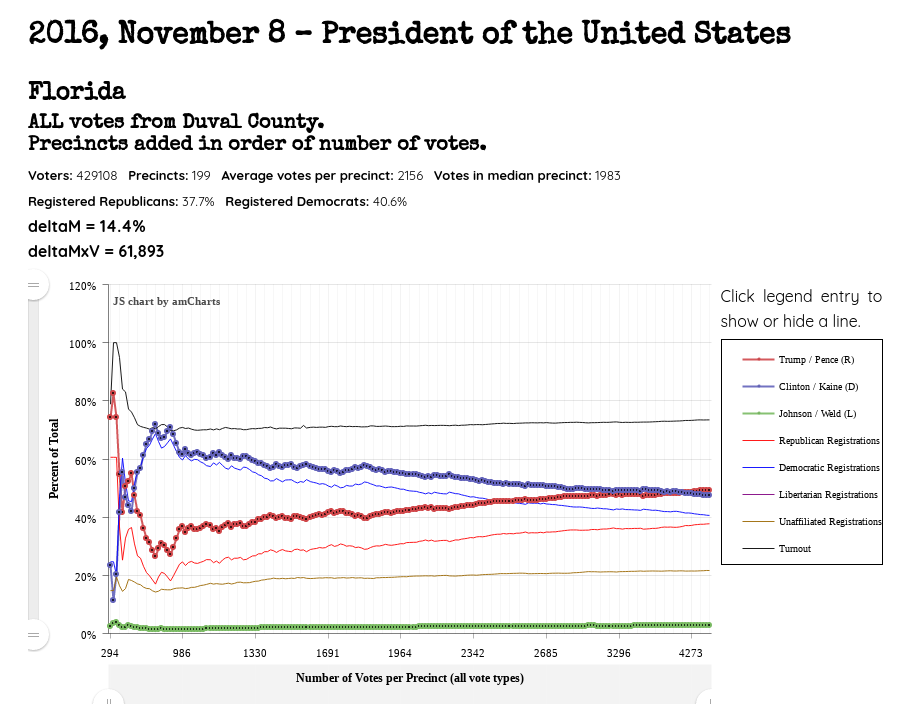 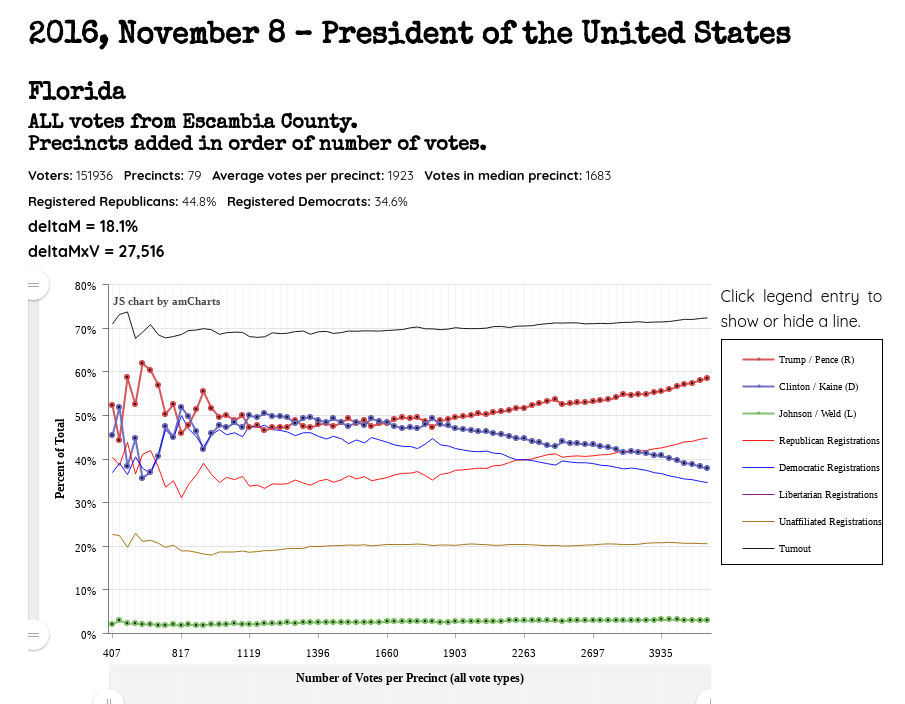 These two graphs, and the graphs for all other large counties in the state show something extraordinary. The voter registration lines parallel the vote lines almost exactly. This is particularly bizarre considering that 20-30% of voters in Florida are not affiliated with either political party. What this means is that Democrats and Republicans must have turned out and voted along party lines at the exact same rate in all precincts in all counties, and the unaffiliated voters must have stayed home or divided their votes in exactly the correct proportions to cause the lines to be parallel.

When this observation is contrasted with the earlier observation that many of the small blue counties voted red it is clear that there is something very wrong with what we are seeing. Looking at a few of these small counties it is still striking how closely the registration lines parallel the vote lines, even though it is very clear that many, many Democrats in these counties chose the Republican candidate: 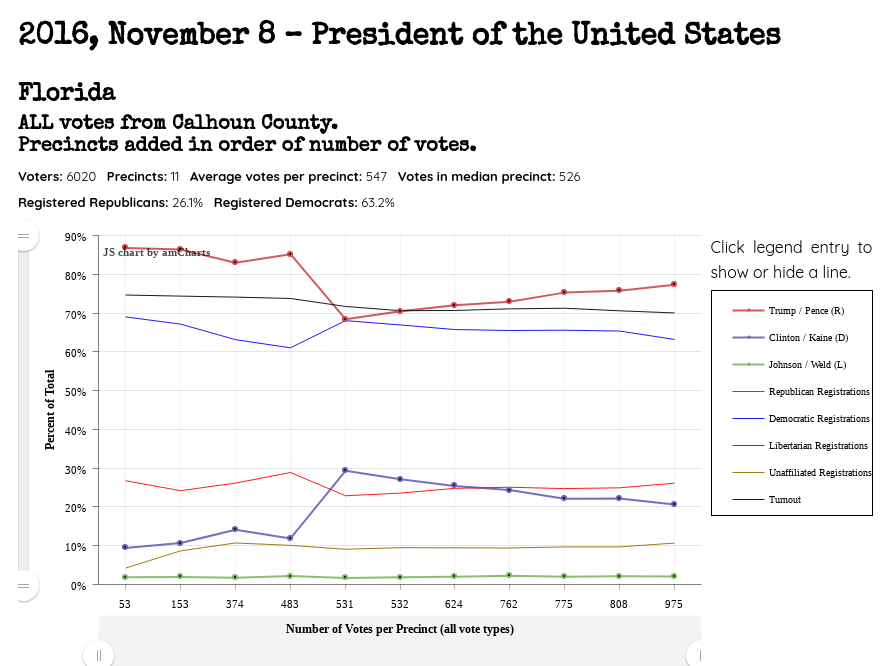 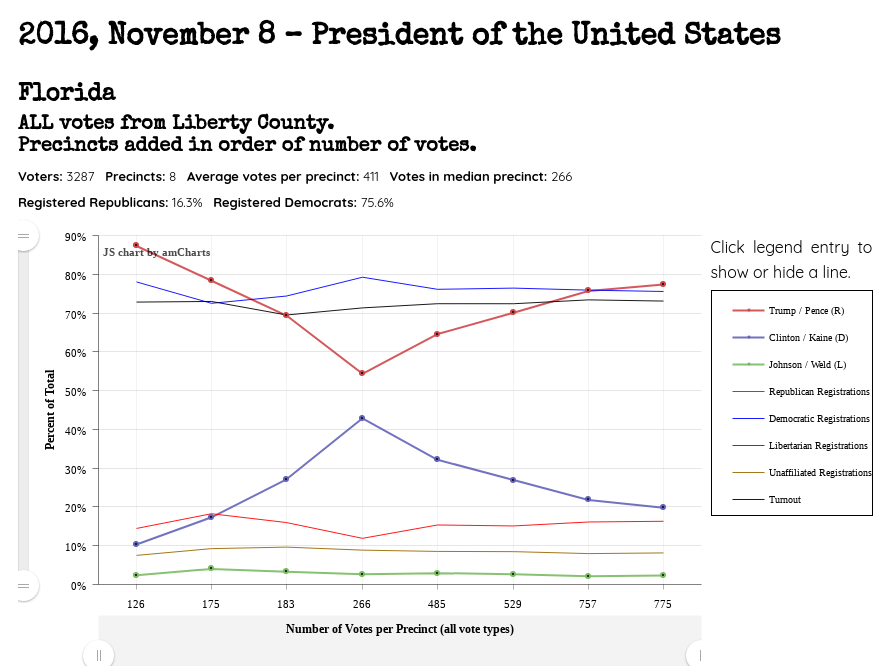