Our analysis of the 2016 Presidential Race in Wisconsin shows that most large counties show a “red shift”, meaning Republican share of the vote increases when votes are totaled from smallest to largest precinct. Of these counties, Milwaukee is notable. In no county do we see a “blue shift”.

As explained on our home page, an election should normally obey the Law of Large Numbers fairly well, unless there is a strong reason for people in larger precincts to vote one way rather than another.

For our analysis of Wisconsin, we started by looking at the state as a whole. This is what we found: 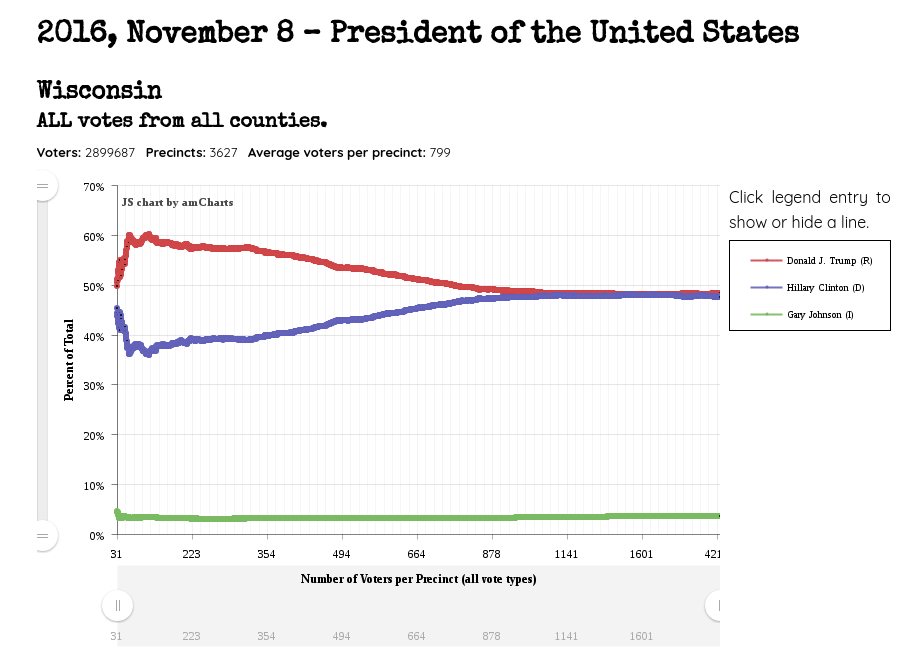 This line initially looks rather odd, with the sharp rise in Democratic votes at the left as we go from precincts that are very small toward those that are medium sized. There is a corresponding decline in Republican votes, for these small-to-medium precincts. Looking at the numbers on the x-axis it becomes clear that Wisconsin has a great many precincts with 1000 or fewer voters, and not as many larger ones.

But when we look at things county by county we see the bigger picture.

In many of the large counties – including Milwaukee, which holds nearly 20% of the population of Wisconsin – the red GOP line trends sharply upwards even at the very far right of the graph, where the Law of Large Numbers should cause it to become flat.

One particularly interesting aspect of these trends is that all seven of the counties that show disturbingly implausible deltaM values also hosted Trump campaign rallies in 2016. Three of these counties – Racine, Kenosha and Brown unexpectedly flipped for Trump. In the other four his showing was much stronger than expected. We wonder if the intent of the rallies was to create an explanation for these surprising results.

Here are the deltaM values for these seven counties:

Here is a summary of the pre-election rallies in these counties:

Here are some graphs of the CVT lines for these counties: 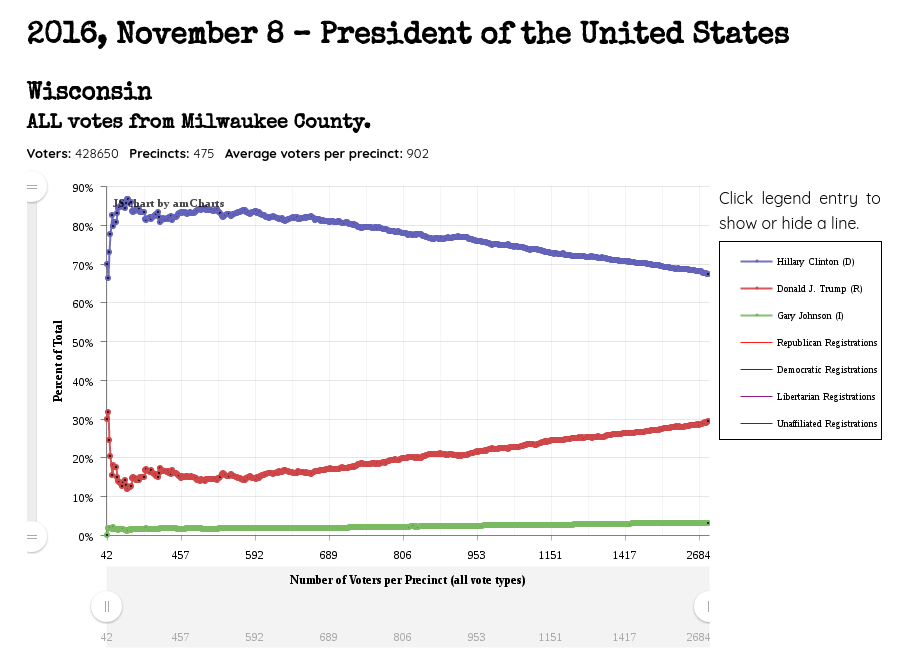 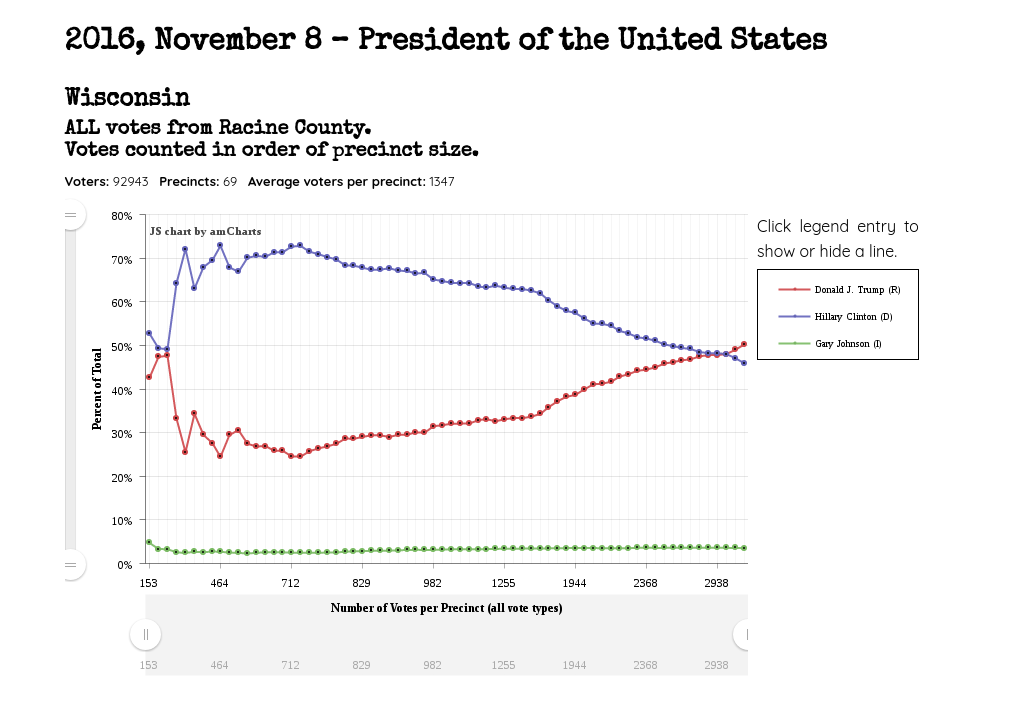 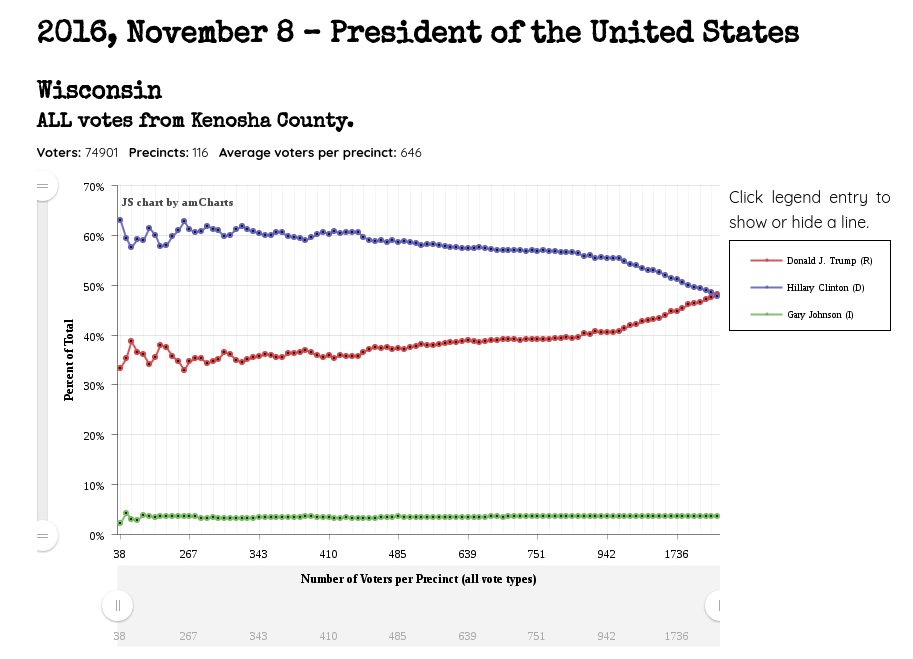 In Wisconsin we were able to obtain voter turnout statistics by precinct, although some of the voter registration numbers reported in the official Election statistics spreadsheet downloaded from here differ by a factor of ten or more from the November registration by ward data downloaded from here. We have asked the state election board to reconcile these errors and provide a revised statistics spreadsheet, but in the meantime we have omitted precincts with obvious large data discrepancies.

We calculated turnout for each precinct by dividing the number of ballots cast by the number of registered voters. When we added the turnout stat to our graphs we noticed something very peculiar. The “cumulative voter turnout” almost exactly matches the cumulative Republican turnout in almost all counties. You can see how voter turnout is correlated with larger precincts even when you look at the state as a whole. 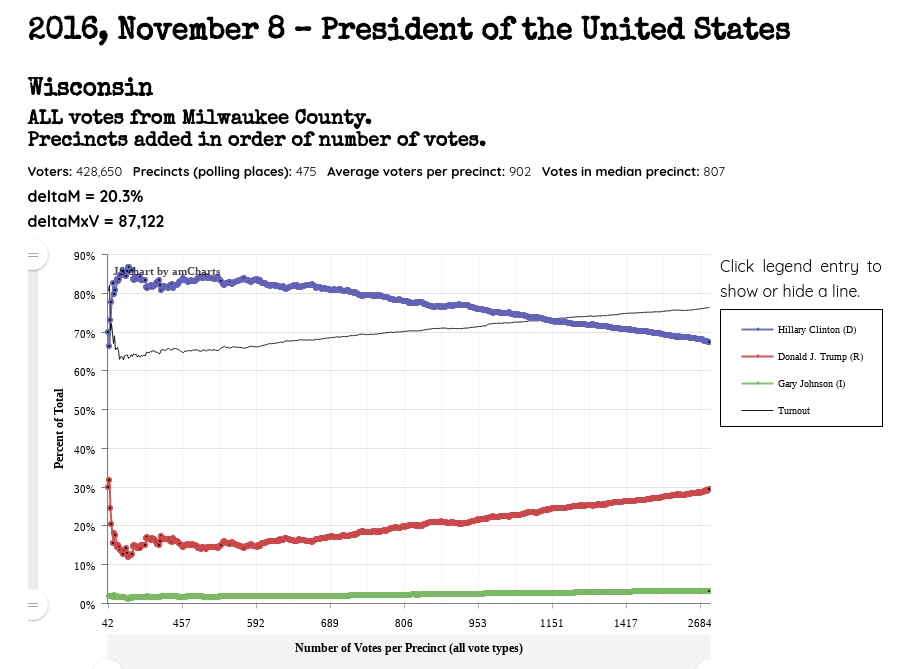 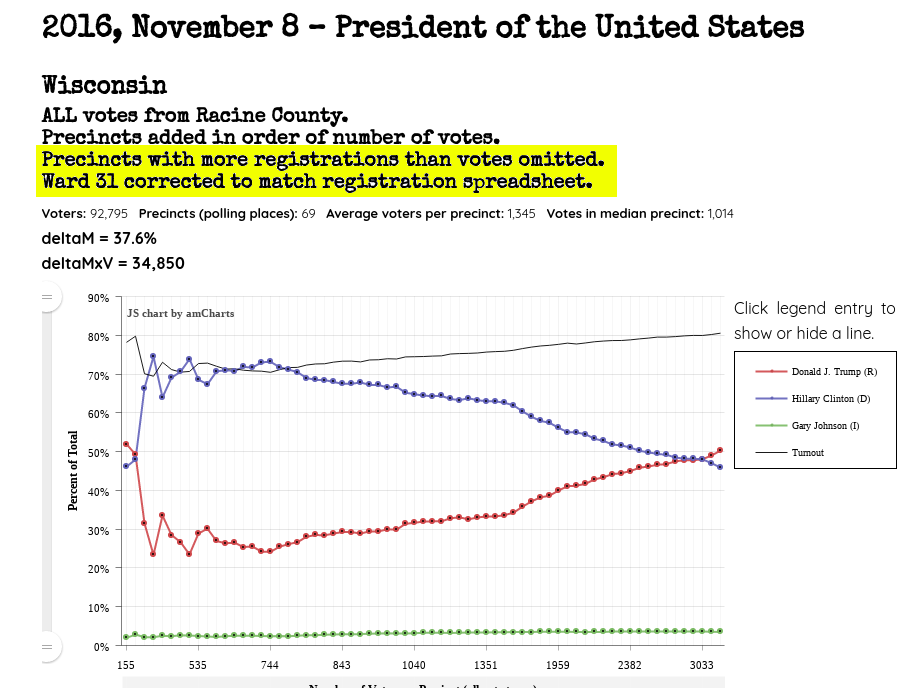 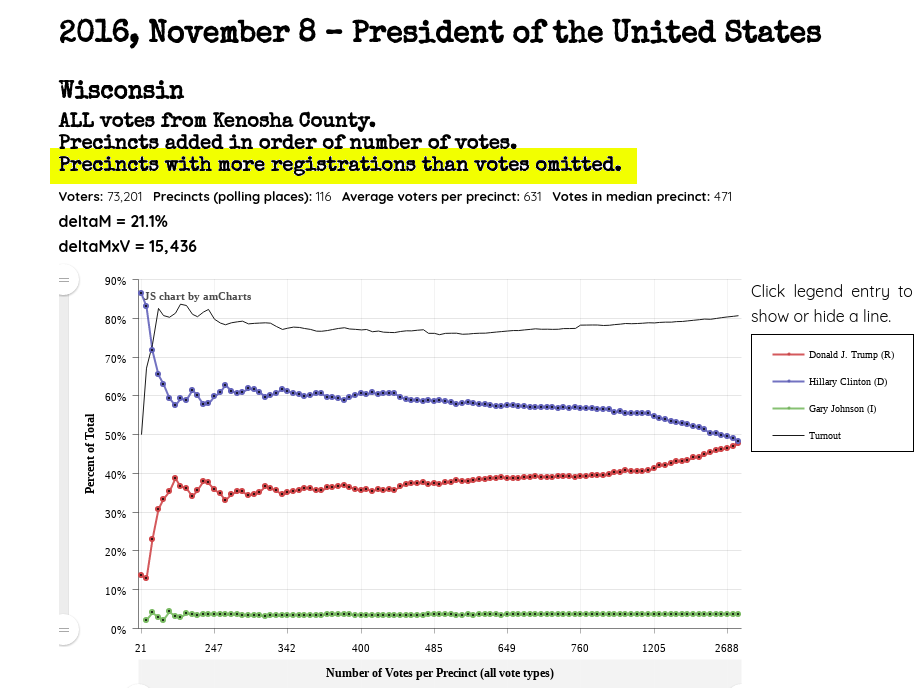 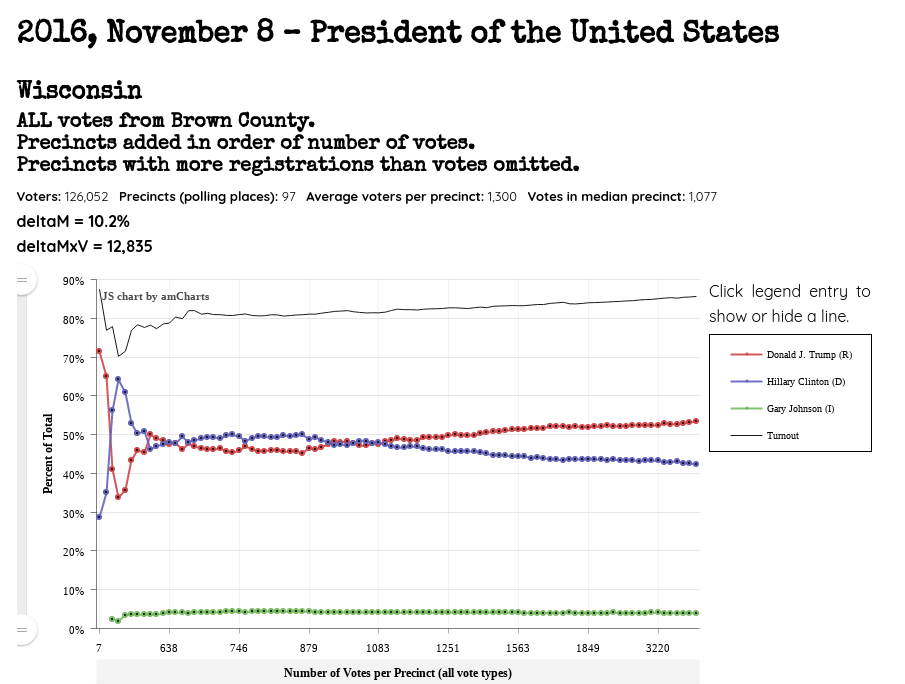 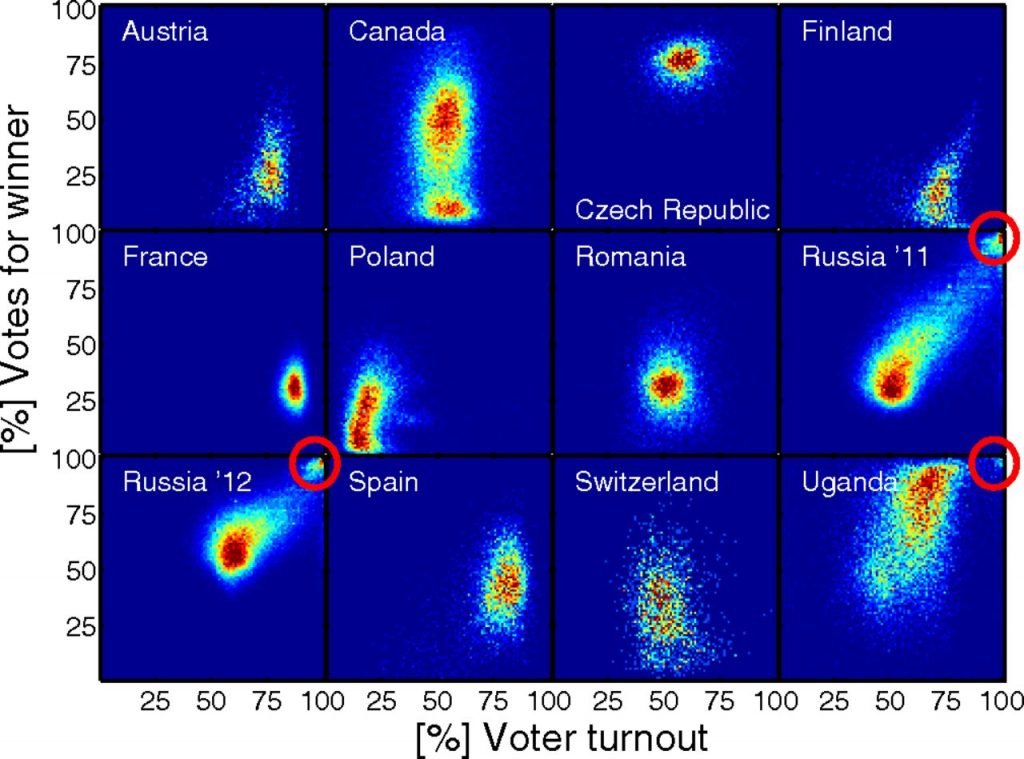 We plotted all the data from the 2016 Presidential race in Wisconsin in a similar way: 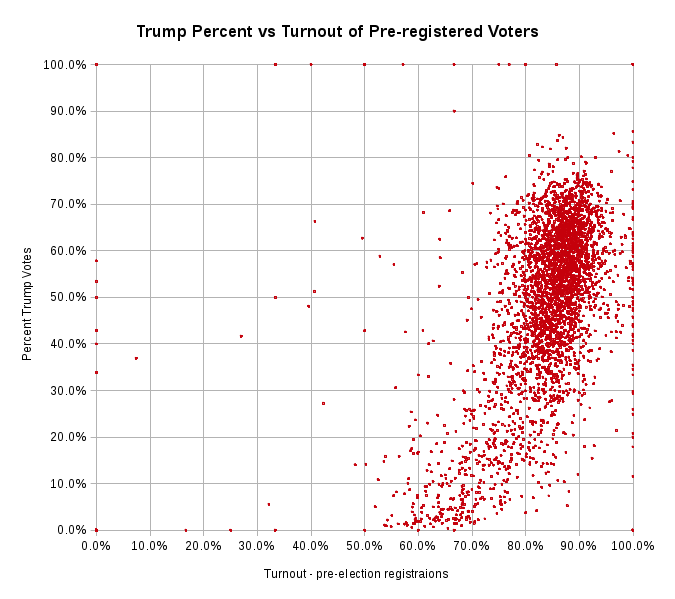 We leave it up to you to decide whether our plot of the 2016 Wisconsin Presidential election more closely resembles that of a Russian or Ugandan election or of a Swiss or Canadian election.

It is inconceivable that voter turnout could have been so strongly and consistently correlated with the number of Republican votes in every precinct, in every county in the entire state of Wisconsin.

In addition to this Cumulative Vote Analysis, we have added a new type of analysis. Benford’s Law describes how often each of the nine digits (1 through 9) appears as the left-most digit in a random selection of numbers. Mike Farb calls this “The Law of Irrelevant Numbers”, because it sounds so strange. But really it’s not. When large sets of numbers are generated by an algorithm rather than occurring randomly, they are less likely to obey Benford’s Law. This law is used in forensic accounting as a “sniff test”. If a set of numbers doesn’t obey this law it is an indication that further investigation is warranted.

An explanation of Benford's Law

Anyone who plays Scrabble is aware that words in the English language that start with the letter T are much more common than those starting with X or Z.

There is a reason for this.

Let’s say you have exactly 100 marbles.

Already you can see that the leftmost jar is filling up fastest. Only when you have exactly 99 marbles will the jars be evenly filled.

If you add 100 more marbles, the new numbers are 100 to 199. Because those numbers all start with one, they all go in the first jar.

Every time you add new marbles, the first few jars fill up before the rest of them do.

The first jar will always fill up first, no matter what.

If you pick a random bucket of marbles and count them out while filling up jars, and then do that many more times, the jars will fill up at rates according to Benford’s law, with more than 30% in your “ones” jar, and less than 5% in your “nines” jar.

This law is a great way to determine whether your buckets actually contain random numbers of marbles.

If I start giving you sets of marbles where the size of the set is always a multiple of 10, for instance, your results won’t be the same.

This is what happens when numbers are generated by something other than chance.

The numbers of votes per precinct should be pretty random, in real life.

But not if they have been generated by an algorithm.

The vote totals for any candidate in a large set of precincts should obey Benford’s Law. Not surprisingly, the same counties that show odd looking lines in our Cumulative Vote Analysis also show surprisingly bold violations of Benford’s Law. 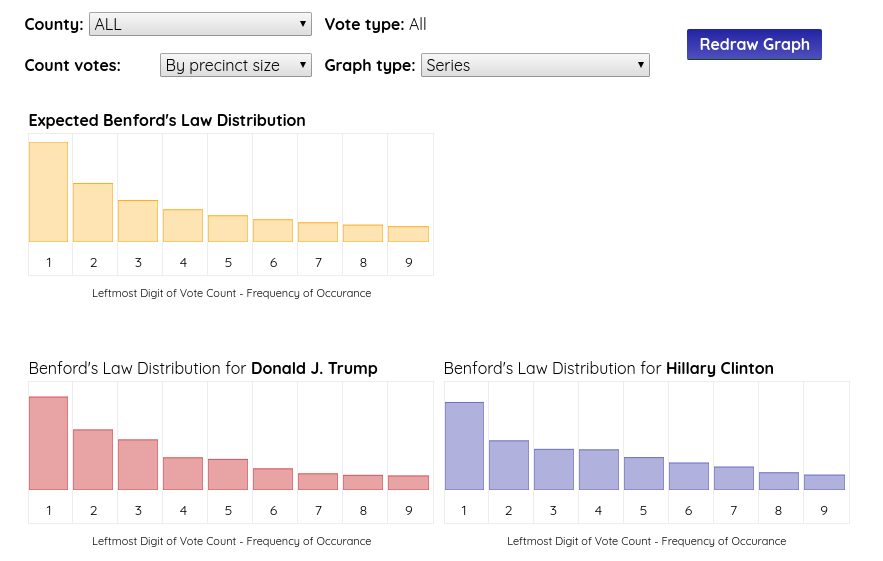 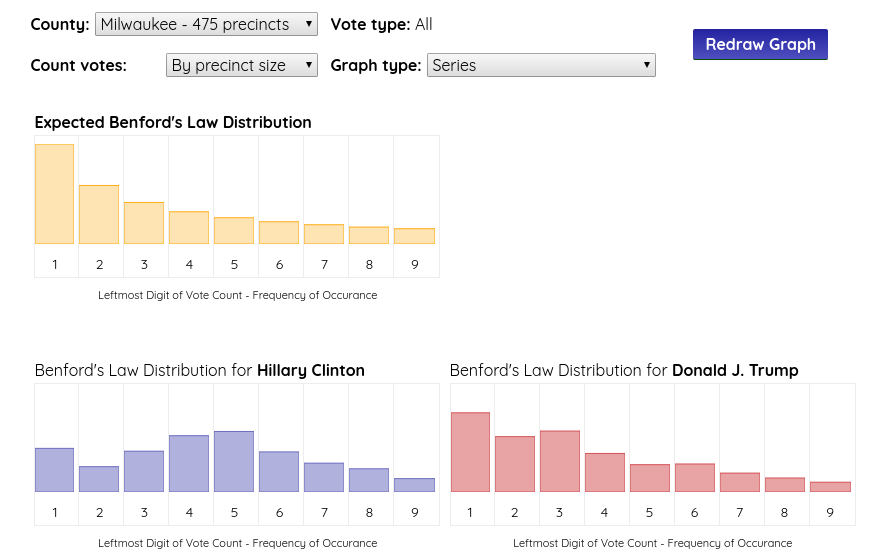 You can see the Benford’s Law analysis any county with more than 50 precincts by clicking the first “plus sign” under the graph controls on any page.